Thank you very much

We participated in the Niigata trade fair held on February 6 at the Hotel Italia-ken. Participating buyers visited our factory tour the day before the event.  Thank you for taking the time to visit our factory, and it was a great pleasure meeting with many buyers. Also, thank you very much for giving us various opinions and impressions. We would like to make use of valuable opinions of everyone for our future business activities.  We are looking forward to seeing you again.

※Apology of delay
Shipment is delayed due to the historic heavy snow of San-jo City this week.
We sincerest apologies, but we would appreciate your understanding. 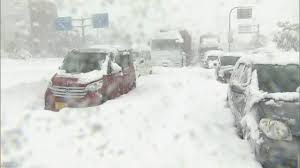 February 3rd is the day of Setsubun.

Setsubun refers to the day before the beginning of each season

(the first days of spring, summer, fall and winter).

Out of all the 4 Setsubun days, Risshun (the first day of spring) is the most special day.

Back in the day, the Japanese new year started on Risshun (The first day of spring).

Setsubun signifies the ending of winter and the beginning of spring.

It is believed that *oni come when the seasons change in Japan.

There are many rituals to exorcise these oni.

The rituals differ in each region. 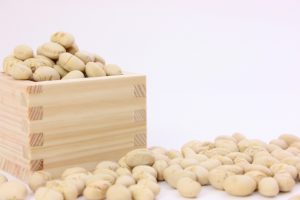 Throwing roasted soybeans was first practiced back in the Heian period, to stop oni from attacking villages by throwing beans at their eyes.

The term oni refers to an invisible negative vibes called jaki in Japanese.

To get rid of the oni, people scatter roasted soy beans both inside and outside of their houses.

In order to instill god’s power in the fukumame, they are to be placed on the household altar until Setsubun.

It has become the dad’s job to wear an oni mask and have soybeans thrown at him.

The phrase “Out with the devil! In with good fortune,” is said when throwing soybeans.

When saying “Out with the devil,” open a window and throw beans twice. Make sure to close the window immediately so the oni doesn’t come back.

When saying “In with good fortune,” throw soy beans twice inside the house.

Once the beans are thrown, gather them all up and eat the same number of beans as your age. Eat one extra to keep you from sickness and stay healthy for the whole year. 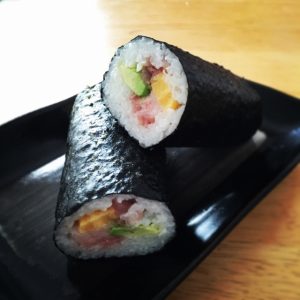 Ehomaki is a sushi roll that is believed to be good luck when eaten on Setsubun day.

When eating Ehomaki, look in the year’s good luck direction, and eat quietly while making a wish.

Ehomaki should not be cut. This represents not cutting any good bonds in the future.

The 7 filling inside Ehomaki represent the 7 gods. This has the meaning of “rolling in goodness (luck).”

Recently, there have been a lot of Japanese snacks and cakes that replicate ehomaki.

This custom began in the Kansai area but now it has become a nationwide event and Ehomaki is sold at supermarkets and convenience stores.