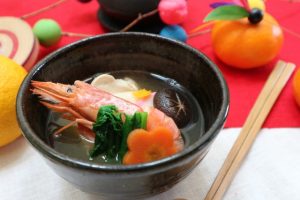 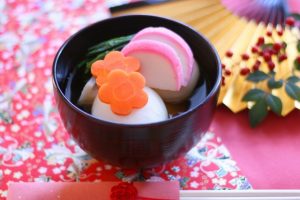 Ozoni is a traditional Japanese soup dish which contains rice cakes and root vegetables ingredients, and it is usually eaten in the New Year.
It is said that ozoni finds its roots in samurai society cuisine. It is thought to be a meal that was cooked during field battles, boiled together with rice cakes, root vegetables and dried foods, among other ingredients.
The ingredients vary from region to region in Japan.
The most common shape of rice cake for ozoni soup is a rectangle in East part of Japan. In the Kanto region and Tohoku region, the rice cakes are cut into squares and grilled before being added to the stock. In the Kansai region and the Chugoku region, a round, boiled rice cakes is generally preferred. In most of the Kyushu region, a round rice cakes is popular, but grill-boil difference changes depending on area. 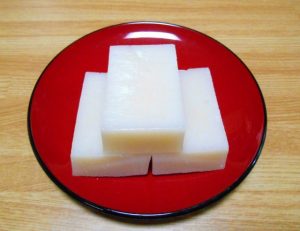 The taste of soup is also varied depending on the region. In many regions including the Kanto region, ozoni consists of a clear soup called sumashi-jiru which is flavoured with dashi, a stock made from flakes of dried bonito and/or kombu, and soy sauce. In the Kansai region and eastern Shikoku, ozoni is made with a stock of white miso, while ozoni in the part of Fukui Prefecture is made with a stock of red miso. In the Tottori-Izumo region, a variety of red bean soup is used for 0zoni.
Common additions to the soup include chicken, fish or meatballs; leafy vegetables such as komatsuna or spinach, kamaboko such as naruto and carrot flakes for colour, and flakes of yuzu peel for its citrus fragrance. Regional specialties are often added.
Eating the very chewy and elastic rice cake with soup, we wish for good luck through the year. 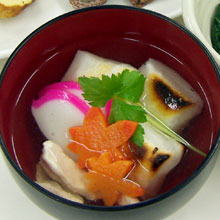 Don-don series shirotsuyu
Light-colored seasoning with white soy sauce and blended fish DASHI such as Bonito, Macherel, and Sardine. It will enhance natural flavor and color of cooking ingredients.
https://www.nextytrading.com/products/7231/