March is a delicious month for seafood. The cold waters still bring fish rich with fat that shines in sashimi or is nice for grilling. 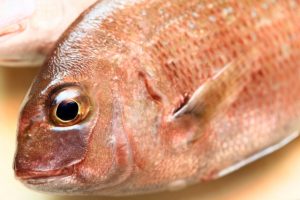 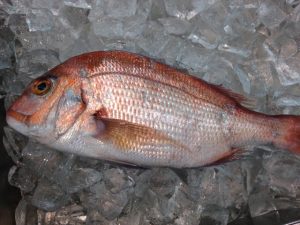 Tai (Sea bream) is a common fish used in Japanese food, as it means good luck in Japanese culture and is eaten during celebratory occasions. There are many different types of tai, but spring is the spawning season for sakura dai (red sea bream). 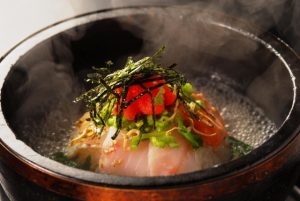 During this season, you can enjoy sakura dai (red sea bream) fresh as sashimi, or as tai-chazuke. Tai-chazuke is rice topped with tai sashimi and dashi (soup made from tai) poured on top. Although you can eat tai in other seasons, sakura dai is most delicious this season! Tai (Sea bream) is much loved in Japan as it is a symbol of celebration (Tai in Japanese), you will always find sea bream at special occasions like weddings. To congratulate someone you would say ‘Medetai’, it doesn’t translate well into English but when I think of Sea Bream it makes me so happy and I think of all the festive times. This dish is a perfect accompaniment for you to enjoy, particularly when you have little time to spend cooking but fancy a treat.

Tai Meshi (sea bream with rice) is today’s wholesome dish that I absolutely love cooking and eating. Especially, as it’s simple and very little fuss to make but also filled with flavour to be enjoyed as a main or starter. 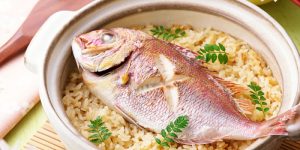 Method:
To make the kombu dashi, wipe the dried kombu with a clean cloth. (*the kombu shouldn’t be washed.)

Put the water in a deep pot and soak the kombu for about 30 minutes.

Heat it up slowly until the water comes to a boil, take out the kombu and remove the stock from the heat.

Rinse the rice with tap water, until the water runs clear. Then cover with water for at least 30 minutes, I prefer for two hours. This will make the rice soft and fluffy. Score the fish on each side then sprinkle both sides with salt. Splash the sake over the fish and leave it for 10 minutes.

Pat dry the fish with some paper towel and put it under the grill for 3 minutes per side. At this stage you do not have cook the fish completely, just until it has an attractive seared colouring.Using a big enough pot, pour the rice in with the stock, salt, sake, soy sauce and mirin. Stir and mix the mixture evenly. Then place the grilled fish on top. Put the lid on and start cooking with a medium heat on the hob.

As it starts to boil, reduce the heat and simmer for a further 9 minutes. Then remove the pot from the heat, leaving it to stand for a further 10 minutes before serving.Present the dish to the table with the fish intact, as it looks great. Then bone the fish and serve with the garnish at the table.

I hope you enjoy it as much as I do.